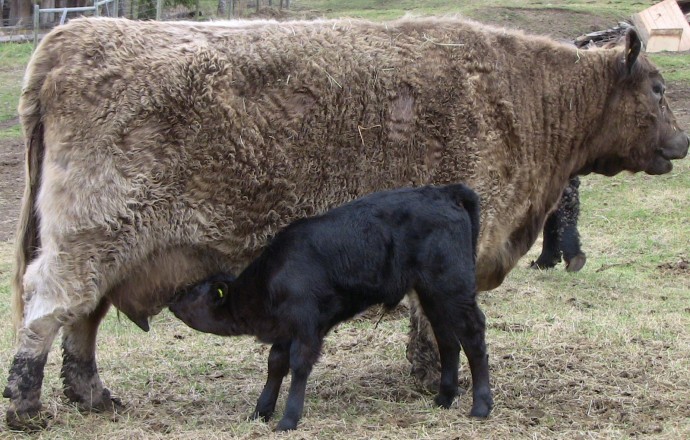 Nettie, daughter of Osa, with her new born. Unlike her mother, Nettie doesn't jump.

Ranch.  It’s a big word, conjuring images to me of vast tracts of land covered by cattle.  That’s why I prefer farm for our operation. It’s 327 acres of trees, bush and pasture with two creeks running through, one in the middle, Lemieux Creek and one on the north end, Robin Creek.  It’s a gentle place with fine vistas of the mountainous Bulkley Valley.

But technically, because we raise cattle, we’re a ranch, so be it.

We started with a few purebred Galloway cows 20 years ago because Google searches had convinced us that they’d do best in the climate and terrain of the Bulkley Valley. They have a double coat and very thick hide, similar to buffalo, so they are insulated against both cold and heat.  The bonus is that regardless of a strictly grass and forage diet, no grain, they produce marbled meat. Udo Erasmus says it’s good for you.  They’ll eat almost any kind of forage including bushes and tree leaves and thrive on it. We’ve had experienced butchers doubt us when we say they aren’t fattened on grain.

The other thing I like about them is their character. They are self-sufficient and largely independent and take very good care of their calves. We laugh because we say they’ll let you take them anywhere they want to go.  Of course the farmer is supposed to be the boss, yadda yadda yadda.  Eventually we added Angus cows to the herd so the calves born here now are part Angus and that seems to make some difference to the stubbornness. And we’re around them a lot so that quiets them, but all cattle have to be convinced at times to cooperate. Most cattle can be a bit stubborn. The Galloway generally will work with you but pushing them is guaranteed to end badly. Respectful suggestions seem to work best 🙂 I can see the eyes rolling now.

Osa was one of our first Galloway cows. She was large and cream-coloured and gave us great calves. We had been told that Galloway will jump, but that wasn’t an image I could conjure. So one morning early on, we had Osa and the other moms confined in a corral and the calves in a nearby pen waiting to be vaccinated. We were still in learning mode and not all that confident. The cattle were upset, calves and cows calling to each other.  But when Osa’s calf bellered for his mom and she saw us put him in the squeeze to give him his shots, she went over the top of the corral rails, 5 logs high. Ah, I thought, that’s what they mean.

“Well hello, Osa,” we said. She didn’t threaten or posture, she came and stood nearby and cooed to him for the few minutes it took to finish.  When we let him go he ran to her and she trotted off with him but as she left she shot me a nasty look.

Over time Osa and I came to an understanding.  I would wait patiently for her to do whatever we needed her to do when there was time for that, but if we needed her to cooperate I would use a scolding tone that said come now with everyone else or I’m leaving you here. And I meant it.  She got to know that tone, and I didn’t push if it wasn’t necessary.  It was better. It wasn’t perfect, but we got along.