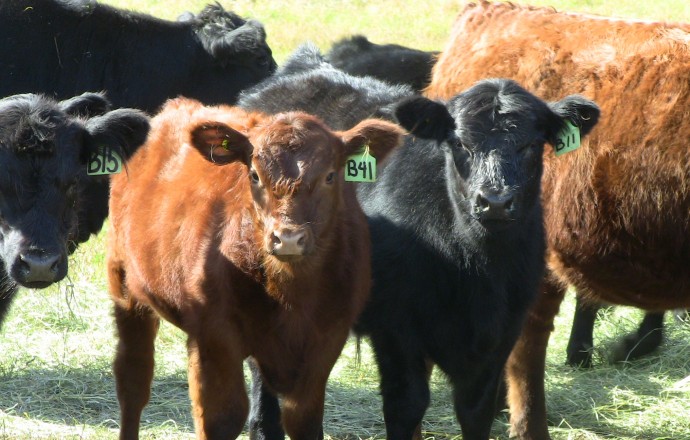 Since the Galloway cows got all the attention in the last post this time I’ll tell you about two of our Angus, Jenny and Angel. Jenny’s a Red Angus cow who’s about to have her 14th calf, she’s 16 this year and still doing well. We have both red and black Angus cows. All three bulls, Angus and Galloway, are black. Last year we had 5 red calves to black parents. The Angus are more sleek than the Galloway, straight-haired and not so much coat, and no doubt you’ve seen the ads about the meat. It is good, and they have good milk and they’re good moms.

We’ve had some real characters among them too. At 16, Jenny is the matriarch of the herd. She doesn’t demand any special treatment from the other cows but she doesn’t back down from them either.  On the other hand, she expects a back scratch or at least a preferential greeting from us. We keep an eye on her and from time to time if she’s looking like she needs a little TLC we bring her in where she can sleep in the barn and have some grain.  Our cows get a few mouthfuls of grain as a treat once a day when they’re in the barn with an ailment or when they’re calving. Calves don’t get those treats, they’re strictly grass-fed, start to finish, but the moms come into the barn for a time after they calve and the grain is a way to get homeopathic remedies into them. It’s a good bonding time with the newborns and the attention seems to make them happy. Some of the older cows, like Jenny, will come to the barn and ask in just before they calve.

Most of the time the herd is out on pasture and most herds have a boss. Angel, another of our original red angus cows died a couple of years ago. Angel was boss cow for many years. Once she understood that it was time to move, and where, she took everyone with her.

One year we moved them all from one area to another, across four fields, through about three gates and across the lane. We thought we were done and were talking about who should check for stragglers when three young steers showed up looking for the herd. They can be harum scarum at that age so we were speaking softly and trying to decide how to move them when we noticed Angel standing across the road at the gate. She was watching us and appeared to be waiting for the three absentees.
We called her and she came right to us.  The young ones waited obediently and when Angel reached them she turned and started back.  The threesome took their cue from her and followed along, across the lane, through the gate and onto fresh grass. All feet were off the ground at once, they bucked and snorted and charged away looking for trouble. At the sound of the gate going up behind her Angel turned. She looked back over her shoulder at us with an air of exasperation and, I swear, she shrugged.